In order to be eligible for the 2020 NWSL College Draft, a player must:

• Be a player who will forego any remaining college eligibility or must have exhausted their eligibility during the 2019-2020 academic year, and
• Be at least 18-years-old during the College Protected Period (which ends with the End of Season Process for the 2020 season), and
• Register for the draft with the NWSL by the deadline at 4 pm ET on Wednesday, January 15, 2020.

For the final list of eligible players, visit: https://nwsl.us/2Tq7kIE

1: Sky Blue FC receives the 4th and 5th overall pick and allocation money, in exchange the Chicago Red Stars receive the 2nd and 3rd overall pick. Chicago then sends the 2nd pick to Portland Thorns FC and receives the 5th and 6th pick along with allocation money.
2: Chicago Red Stars acquire Racheal Hill, the 19th pick in this year’s draft, a first-round selection in the 2021 NWSL Draft and allocation money. Orlando Pride receives the 3rd overall and 26th overall pick in this year’s draft.
3: Sky Blue FC adds a player to be named later as Washington Spirit acquires the 4th, 13th, and 17th pick in this year’s draft as well as a 1st round pick in the 2021 NWSL Draft.
4: Portland Thorns FC sends 34th overall for the 2020 NWSL College Draft pick to Reign FC for a player to be named later.

Take a look back at all of the selections from the past NWSL College Drafts to see who your club selected each year.

Keep up to date on the latest scores, video highlights, match-ups, stats, standings and news from the NWSL. Find out where to watch every NWSL game and watch full games on demand. 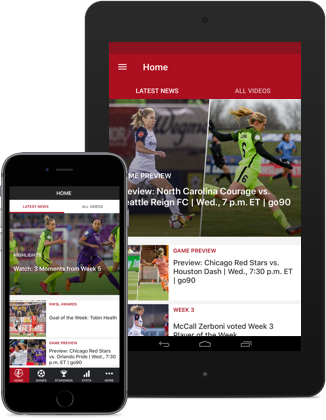