Every National Women’s Soccer League offseason sees a flurry of loan moves, as players turn abroad to supplement their development and playing time outside of the United States. While a majority of this perennial focus turns East to the Australian A-League, a move West to sister club Olympique Lyon was on the cards for a trio of OL Reign’s standout players.

“I was asked about the opportunity in Lyon in the Fall, and I was incredibly humbled by the offer,” said forward Bethany Balcer. “It was such an easy decision to go and develop my game with a team like Lyon. They are incredibly professional and have some of the best players in the world. It was amazing to train alongside them day in and day out.”

Balcer, alongside Sofia Huerta, headed to Lyon – where Celia Jimenez Delgado had begun her loan spell with Reign’s sister club in September. The trio represents the first in what is sure to be a flurry of moves between Tacoma and Lyon in the coming years, as OL Groupe actively aim to expand the on-field relationship between the sister clubs.

Balcer says that the experience not only benefitted her game, but left her with an appreciation of the organization as a whole.

“I feel like my game has developed tremendously,” beamed Balcer. “I’ve always strived to be a more technical player, and OL really aided me in developing that side of my game. It was amazing to see the two clubs come together in this way and bridge the gap between them. OL is an incredible organization top to bottom, and we were able to see that firsthand. We left feeling grateful about what OL has done for us back in Tacoma.”

lyon you have my heart after just one night, and good thing too cuz now we head into lockdown😭 pic.twitter.com/4CJr2woX0L

The opportunity abroad didn’t only allow for growth on the field, but off the field as well. OL Reign Head Coach Farid Bestiti – a Lyon native who has played for and managed Reign’s sister club previously – also spent the winter in central France. Balcer noted that while time spent with Farid did involve discussion of the 2021 Challenge Cup, the trio were able to get to know him better off the field.

“We did get to see Farid a couple of times – safely of course, as we all were getting tested,” said Balcer. “We met his family, and it was nice to learn more about him and his roots. Thinking only about work is stressful, so it was nice to be in a more casual environment and just talk about life. We’re all excited for the upcoming year though and know we are capable of so much.” 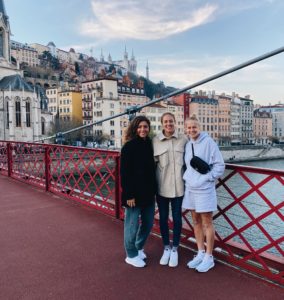 However, with the COVID-19 pandemic still prevalent in Europe, a majority of the Balcer’s time abroad was spent with down time in her apartment. While many fans have seen how many TikTok dances her, Huerta, and Delgado learned in Lyon – Balcer said there are many memories that she’s bringing home with her.

“We played card games all the time,” said Balcer. “Celia, Sofia, and I are all competitive and hate losing – so our trash talk was constant. It was so enjoyable to dive deeper in conversation and grow our friendship. Above all, I’ll never forget all of our long walks through the city – and our failed attempts and making pizza at home.”

Balcer laughs – and makes sure to correct herself to give credit where it is due.

“Not Celia, though. She was amazing. Sofia and I struggled.”