While 2021 preseason matches for the NWSL’s ten teams are yet to commence, fans of one of the league’s most prolific clubs – and one of its most-discussed expansion sides – will have a derby of-sorts on their hands this evening. 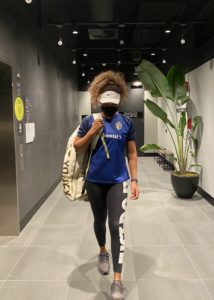 While both players have been seen in their respective club’s merchandise throughout the Australian Open, Serena was recently asked about the pair’s involvement in the National Women Soccer League.

“I feel like women’s soccer is one of the most exciting sports ever, so it’s super exciting to watch,” Williams told reporters. “And to support them and to bring a major league into the United States is definitely something that’s super important.

Naomi Osaka’s North Carolina Courage are currently in preseason preparation for the 2021 NWSL Challenge Cup, which is slated to kick off in April of this year. Serena Williams and Angel City FC, who will play home matches at LAFC’s Banc of California Stadium, are currently preparing for their 2022 inaugural season – with their expansion draft selections due to happen at the end of this year.